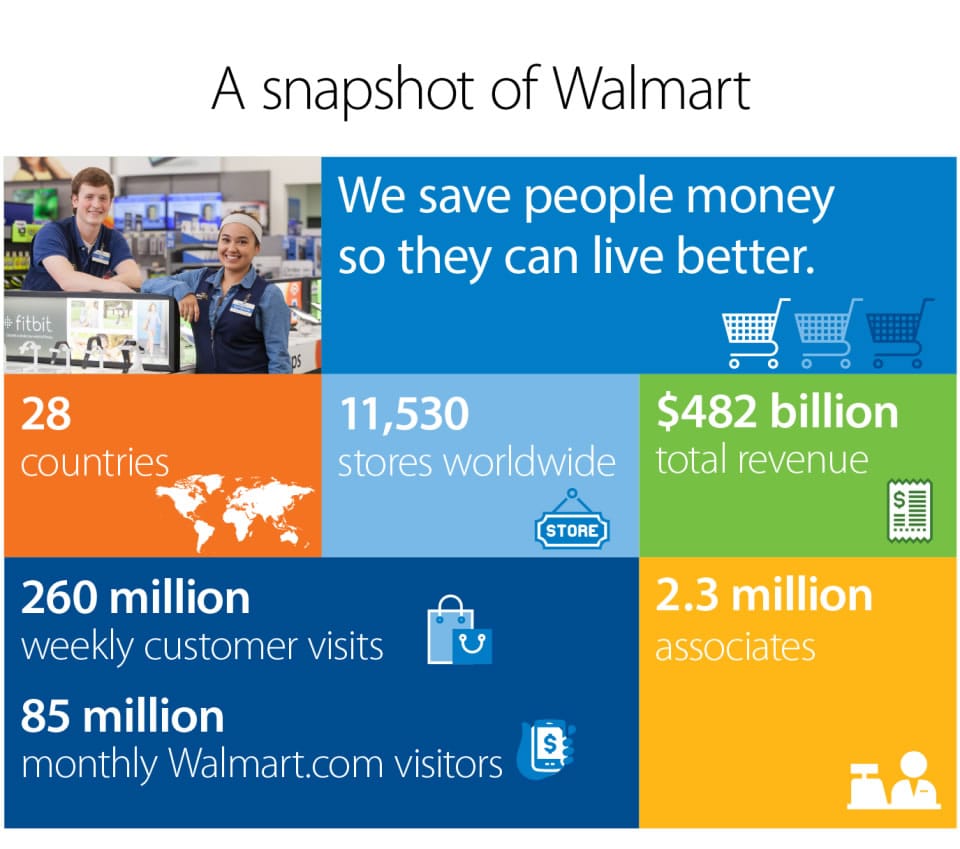 In this paper, we are going to study the marketing strategies, historically applied by the specialists of Wal-Mart and their influences upon the development of Wal-Mart.

In order to have some clear picture of this business, it seems necessary to provide some brief historical overview about Wal-Mart. Most people are sure, that discount retailing appeared in 1962 when Kmart and Wal-Mart appeared. In reality, Sam Walton became the owner of the chain of several stores in the 1950s already. Aimed at opening Wal-Mart, Sam used his first strategy – he traveled a lot in order to make a picture of what is discount retailing and what kind of new store is needed for the consumers in America. As a result, the first Wal-Mart store was opened in 1962. Later on, Sam was able to build 15 stores, and only within the next ten years, the company grew up to 276 stores in 11 states. “Wal-Mart excels at operations and execution often by providing a reasonable quality at a very low price. The focus is on efficiency, streamlining operations, Supply Chain Management, no-frills, volume counts. Wal-Mart also maintains status quo with the other two disciplines by offering innovative” (Reyes, 13). Also, a very important strategy was Wal-Mart orientation on every American in the middle of the country. In reality, there are a lot of people, living in small towns, where there are no big corporations, for them, Wal-Mart seems to be a great solution.

At the moment we could count 7 390 stores, where more than 2 million people are working. Their service is provided for around 176 million consumers annually.

After we have discussed the rapid development of Wal-Mart, we are going to stop in details at the marketing strategies, which contributed to this development and Wal-Mart’s success. The quick growth of Wal-Mart was possible first of all due to the two major objectives, which were worked out by its specialists. The first one was giving to the customers, what they needed for a reasonable price, and the second one was related to team spirit, as the basis for cooperation between the workers of the company. Theoretically we all know, that employees are the key to the success of the operation of any company, but not everywhere they are organized and treated in the corresponding way, in the way, that they feel themselves as partners, as integral parts of the company they are working for, not just like mechanisms for gaining profits for the company.

The basis for the development of customer intimacy and other important disciplines were the three key strategies of marketing: operational excellence, product leadership and customer intimacy (Frank, 6). In our opinion, the operational excellence strategy along with product leadership strategy was perfectly applied in Wal-Mart, and further, we are going to prove it with several examples of the operations. The key points of Wal-Mart’s operational excellence strategy were constant low costs and maximally convenient delivery of products. The way to achieve these results was, of course, to concentrate upon reduction of costs for light, heat, energy consumption, better control of the inventory and finally the development of good and stable relations with suppliers. Wal-Mart also avoided non-value production approaches and managed to re-define integrated retailers relationships with producers (Frank, 8). As a strong facility for supporting this strategy different IT systems were applied, such as for example satellite networks, EDI systems, and UPC scanners. The highest level of service, provided for the customers, is the fact, that many of Wal-Mart stores are 24 hours open 7 days a week, including also the garage, pharmacy, photo lab and so on. A very important step for further lowering of costs was an implementation of Radio Frequency Identification for the top suppliers. This system is able to contribute to increase of distribution efficiency and help to avoid the unloading of products for checking them. For supply chain, this technology is able to save around 6 % of costs. The same system can also help to reduce check labor requirements and shrinkage. All this, however, doesn’t mean, that technological facilities are used for 100 % by Wal-Mart, there is enough space for further development and increase of efficiency.

We already mentioned the customer intimacy strategy, applied by Wal-Mart. “Customer Intimacy, as defined by Treacy and Wiersema means segmenting and targeting the markets precisely and then tailoring offerings to match exactly the demands of those niches” (Reyes, 4). This strategy is actually reflected in Wal-Mart’s Modular Category Assortment Planning System (MCAPS). The major aim of this system is to study and to evaluate the store traits and information about sales in order to provide the precise plans for supplying products, best suiting this or that market. There is a great number of such layouts produced, where the size and major characteristics of the target market are evident. In addition, there are several information systems, which are responsible for making the analysis of the data collected, which will be further used for better product – consumption planning.

Also, we could trace this type of strategy in a segmentation of Wal-Mart, presenting the three store types, corresponding to a certain target market. This strategy also includes the work of local store managers, who are more aware of the current situation in the specific market and are better able to adjust the special promotions to the market needs.

The so-called product leadership strategy was not really a practice for Wal-Mart. We can not deny the fact, that Wal-Mart is one of the industry leaders in providing a lot of innovations, but hardly does it offer customer’s leading-edge products and services.

As it was already mentioned, Wal-Mart has always been open to introducing new strategies, like for example the time for financial services once came. Wal-Mart had a great number of services offered, and financial services were considered to be a good complement to the rest. This strategy seemed so real and worthy first of all because it could be easily facilitated, under the condition of some modifications done in some stores, like in the case with photo labs. There are no great cost expectations and initial mistakes, although possible, can be easily fixed. By making a serious transformation of the operational excellence strategy and customer intimacy strategy Wal-Mart left the space for implementation of various information technology systems, related to these strategies. This makes the complementing of the financial service even easier. The last, but not least important factor considered, was certainly the comfort of customers. If somebody has to go shopping and to visit a bank, this would seem logical for him to use the possibility to do it in the same building, to save time and efforts.

Certainly, it is necessary to consider not only positive sides but also the possible difficulties of the strategy. “references have been made to various regulatory problems that Wal-Mart has encountered. These must be evaluated because if regulatory problems are going to be a battle in every state, it would make the rollout of such services very costly, especially if Wal-Mart had to continually lobby state and federal governments or hire lawyers for litigation proceedings.” (Morrison, 11).

Also, the issues of IT security should be thoroughly studied. Although the financial services could be based on the existing IT developments, due to their peculiarities there is a strong need for additional security measures. And finally, the need for highly –qualified financial specialists should be considered.

Speaking about the newest strategies, applied by Wal-Mart stores, we are to mention their sophisticated media strategy, which is based on an integration of Internet, mobile marketing, TV network in the stores. According to John Andrews, who as the director of emerging media at Wal-Mart explained, that the major aim of this strategy is the transition from the transactional relationship with its customers to “interacting with them in a meaningful way.”

The media strategy is predicted to help to save money for women, leading households. This system should be useful not only as an advertising strategy for a retailer but for the customers also. Andrews also stated that they are going to use mediums, including Facebook, YouTube, and Twitter, with the aim of developing loyalty and understanding of the customers’ needs, along with a reduction of costs and supporting the brand itself. “Elevenmoms” is already a part of this strategy, which presents a number of mom bloggers, used by the retailer for showing the ways of saving money. These bloggers are to be connected to other moms in Wal-Mart and provide even more tips for saving money.One of the brightest examples of the moms is Jessica Smith and her fashion contest, where she presents a fashion look of a celebrity and then shows how to create it at Wal-Mart, giving out only 75 dollars.

Overall, in this paper, we discussed the historical facts about the famous retailer – Wal-Mart and its successful development and operating, proved, that the key to this success was the marketing strategies, applied by the specialists of Wal-Mart. Very important was the timely application of this strategies and skillful combination of the strategies with IT technologies, available at the moment. From the very beginning, Wal-Mart concentrated on one important policy – low pricing and managed to keep it until the moment. Another very important approach was respected towards customers and their interests and comfort, which proved to be one of the best advertising strategies. In the ads of Wal-Mart, there is a reflection of their customer respect policy, which is supported often by using customers instead of actors in ads. This type of advertising costs lest and brings much more positive results due to its authenticity.

Wal-Mart marketing program is, on the one hand, many-sided and perfectly developed, on the other hand, it is prominent for its simplicity. Wal-Mart specialists were able to encourage trust with customers, who are always sure, that they will find the products for the lowest possible prices and with wide assortment there.

This is evident, that in order to sustain the position Wal-Mart has at the moment, there is a strong need in continuing the development and application of new marketing strategies, corresponding to the changes of the customers’ demands and technologies.