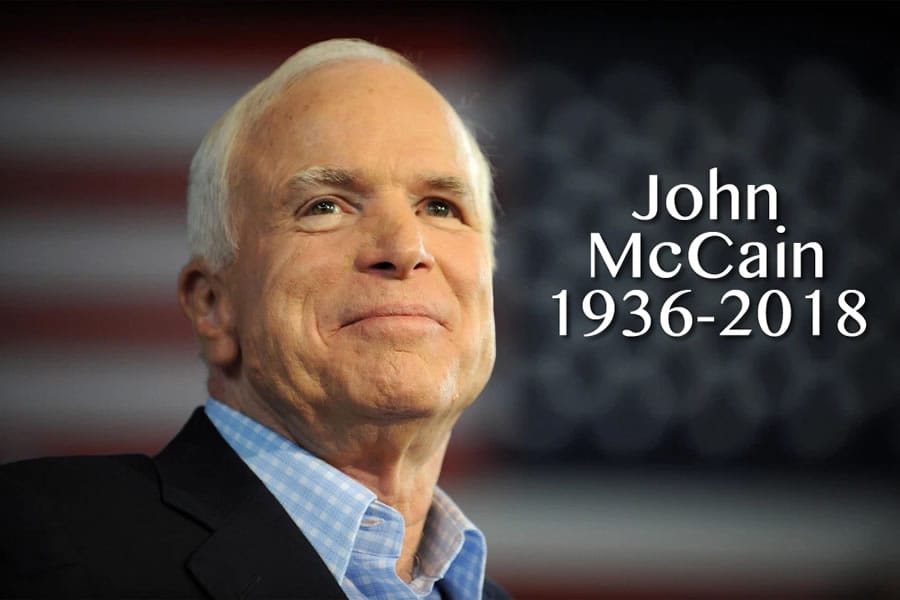 In Memory of John McCain

Today, the world mourns for the loss of a great man, leader, and politician, who was known for a clear political vision of the development of his country and an irreconcilable attitude to the injustice in it and beyond its borders. US Senator John McCain has died at the age of 81. In the last years of his life, the politician suffered from brain cancer, and he decided to abandon the treatment shortly before his death in connection with the failure of various attempts to overcome the disease. It was not an easy decision because McCain had been battling glioblastoma that is a form of an aggressive brain cancer, but none of the battles can last forever and McCain’s supporters supported this decision and prayed for him since McCain personified service to his people and country and every his decision was worthy of respect.

It is worth noting that the fate of John McCain was predetermined long before his birth because strong personalities are often the result of education in the family of the military. McCain’s father and grandfather have reached high positions in their military careers and they were admirals in the United States Navy. Thus, John McCain was born into a military family in 1936 at the US Air Force Base in Panama. In 1958, he has graduated from the military academy and became a pilot of naval aviation. The beginning of his service was during the years of the Caribbean crisis (October 1962). Since 1967, he served as a pilot in the aircraft carrier Forrestal in Vietnam. In the same year, in October, McCain was shot down by a Soviet anti-aircraft missile of the S-75 complex in the region of Hanoi. The pilot, who had both arms and legs broken, was sent to Hoa Lo Prison (“Hanoi Hilton”). During the war, this prison was used to keep captive military pilots. The next five years left an indelible mark on the soul of McCain. He himself claimed that he was constantly tortured and was on the verge of suicide, while the Vietnamese side said that it treated the prisoner carefully and helped to recover from injuries.

Captivity and Its Consequences

This was a turning point in the fate of McCain since he was taken a prisoner to the Vietnamese. In 1968, the Vietnamese communists, taking into account a high position of John McCain’s father, offered to release their prisoner, but John McCain, is a very strong personality, as well as a worthy son of his father, who was the U.S. Navy commander in the Pacific, refused to be released at the expense of his father’s position. In the Vietnamese captivity, McCain spent more than five years and was released only in 1973. It was a very hard period of McCain’s life, but such a rigorous test helped McCain not only to gain extra strength of character but also developed an irreconcilable attitude to the injustice around him.

To date, the opinion of American politicians has been divided on the correctness of utterances and decisions of John McCain, but this means so little in the context of the fact that McCain left a deep imprint on the hearts of people who respected him and followed him throughout his political path. According to his views, McCain can be attributed to the most zealous “hawks” of the American political arena. He was a supporter of the war to a victorious end in Iraq, but at the same time, remembering his past in the captivity, he came up with an initiative banning cruel treatment of prisoners in Guantánamo prison. He put forward the idea of creating a new organization instead of the UN, which should include more than a hundred countries with a truly democratic system. Russia and China were not awarded the place on this list.

Last Years of Life and Death

John McCain always had firm views on the situation in the world and remained a critic of the modern Russian leadership for the rest of his life. McCain argued for the need for Euro- and North Atlantic integration of former Soviet republics, especially such as Georgia and Ukraine, and also disagreed with Obama’s position on the Syrian issue. According to McCain, it was necessary to show firmness and clearly follow the plan. He also believed that the US is obliged to increase its military potential as an insurance against possible threats from Russia and China. The politician was a supporter of the liberalization of US immigration legislation and legalization of same-sex marriage but advocated the prohibition of abortion and the abolition of the death penalty. He fought vigorously for the prohibition of torture in American prisons.

John McCain, one of the most warlike and determined American politicians, the “eternal” senator from Arizona State, passed away on August 25, before four days before his 82nd birthday.

McCain lived an eventful and very interesting life. For some, he remains a hero, for others – an opponent. Despite all the circumstances, many worshiped him for his conservatism and loyalty to the army.

Heritage of Thoughts and Ideas of John McCain

Preparing for the future withdrawal from life, John McCain was concerned about the fate of his homeland and seemed to want to direct the life of his country in the right, as he believed, a course of its development. McCain believed in the greatness of his country and he wanted America’s policy to return to the goals and practices that distinguish it from other nations. He wanted people to realize that there is much more in common between them than differences because this is the basis for the correct development of everything in this world. McCain adhered to the position of equality and argued that every person is not only created equal but also deserves the right to justice and freedom.

McCain did not consider citizens of America sacred and honestly admitted that Americans are not ideal and are not always right. He realized that many people are ardent and selfish in their nature, as well as they often make mistakes in their desire to achieve the truth and insist on their rightness. Nevertheless, he always believed in good impulses in the soul of every person and believed that Americans are able to do good much more than evil.