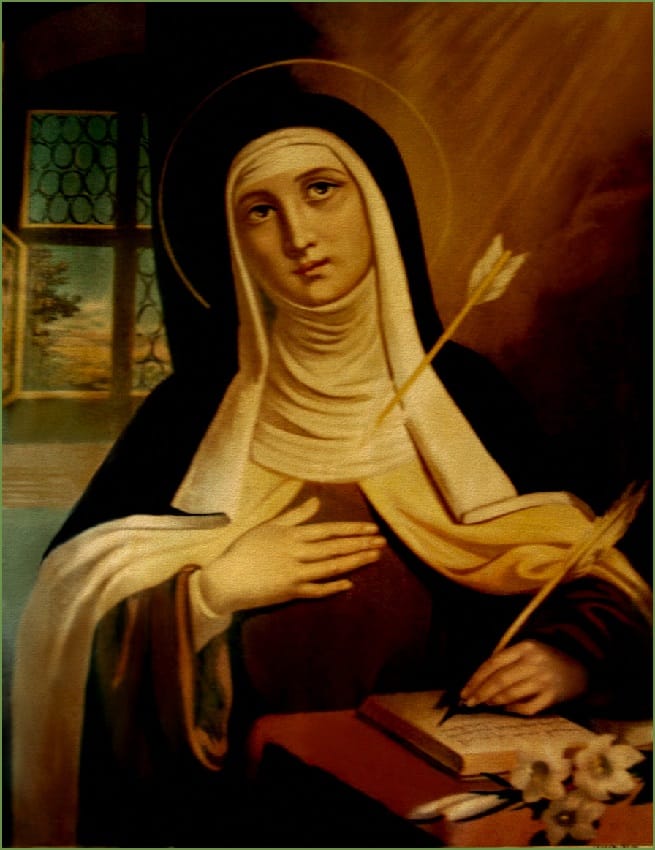 Teresa Avila was one of the brilliant Christian mystics. Her real name is Teresa de Cepeda y Ahumada. She was born on 15th March 1515 Avilla, Spain. Her parents were both religious Catholics. In some ways, they inspired Teresa to become prayer. She was very close to her Mother, who died when Teresa was very young. The girl was charming. She easily made friends and enjoyed friendship. When Teresa was 16, her father sent her to a convent school. Probably, it was more relaxed than living with father. But soon the convent changed: it became overcrowded and material possessions became more important than spiritual intensity. Teresa struggled because of this. She started to teach people on the goodness of mental prayer. In some time after this Teresa experienced malaria, which for a long period left her in great pain. She was afraid of this illness. However during this period of an intensive physical pain, she started to experience more and more divine concepts and an inner meaning of the world. These experiences of peace and joy seemed to exceed the physical pain. When she was feeling better she resumed her prayers with regenerated energy. However, on telling others about her visions she was dissuaded from convincing them. The certain clergy felt, that they were only devil’s error and as a result, Teresa almost lost the faith and her spiritual life was put on hold. Only when she was 41, she met a Priest who persuaded her to return her spiritual life and to beg God to come back. At the beginning, she had some difficulties being with prayers. She ironically noted, that the end of a pray could not come soon enough. Nonetheless, she became absorbed in deep meditation and an increasing feeling of oneness with God bloomed in her soul. From time to time Teresa felt like she was amazed with divine love.

These experiences were so reformative, that she felt the lighting up with grace and began to believe that God would wash her soul away. She started to believe in miracles. But she was not a quiet saint. She had a natural, submitting quality. Her life energy inspired many people who were close. They admired her for her natural charm and inner calm. Besides, Teresa’s religious experiences caused envy and various suspicions. As it is known, during that period of the Spanish inquisition, any other faith, except for orthodox, came under the strict inquiry. St Teresa struggled because there were a few people who could understand her and her inner ecstasies. At the age of 43 Teresa decided she wanted to found a new order return to the values of simplicity and poverty. She wanted to move away from the convent which made a life of prayer more complicated. At the beginning her aims were greeted with opposition in Avila. But with some Priests support, she was allowed to set up her first convent. Teresa proved that she may be a leader and founder. She taught the nuns not just strict disciplines, but also common sense and power of love.

Her way was not the way of asceticism and self denial. St Teresa underlined the importance of experiencing God’s love. She was sure that it is significant not to think much but to love much, and that desire to please God is everything. Much of the rest of her life St Teresa devoted to travelling around Spain setting up new convents that were based on the ancient monastic traditions. Her work was not always greeted with enthusiasm. Many were rebelled by her reforms and the criticism of existing religious orders. She often faced criticism and difficult living conditions. Her health was weak. Nevertheless, she never let these obstacles discourage her from her life’s task. She died on October 4 at the age of 67. As about the writings of St Teresa, she wrote about her personal experience in the spiritual life. Her “Autobiography” was originally written as a demonstration of her spiritual state, was later amplified in scope and in audience.

In metaphorical terms Teresa shows different stages of the prayer’s life. Her “Way of Perfection” Teresa dedicated to her nuns, teaching them the major goodness’s that require their care, hurling further light on the life of prayer, and using the Pater Noster as a vehicle for teaching at greater severity. “The Interior Castle” is the source of full-blown Teresian thought on the spiritual life. “The interior castle” is the soul, in the center of which the Trinity lives. Growth in prayer empowers the individual to become in deeper intimacy with God – represented by a journey through the apartments of the castle. When a person has reached union with God in the extent allowed to him in this world. Each of the apartments of the castle is recognized by a different stage in the growth of prayer, with its rational effects upon every other phase of the individual’s life. St Teresa found thirty two monasteries. Her grand legacy is her lectures and books on Prayer, letters, writings, Mystical Theology and Spirituality that have made an important impost to learning in the Church.

Essay on History of Islam